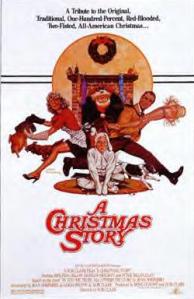 First of all, let me apologize to you, loyal readers (the two or three of you) for not writing anything new for two weeks. I’ve been really busy.

My latest post is somewhat special, since it’s my first double review. Over the Christmas weekend, I decided to watch two traditional holiday films. The first one, National Lampoon’s Christmas Vacation, is a 1989 Chevy Chase-starrer. Boy, that movie has not aged well. Maybe it was acceptably funny when it came out, but by now the ridiculous plot and the outlandish characters can’t help but seem dated. Also, for a movie with “Christmas” on the title, the Christmas cheer factor is very low. *

At the other end of the spectrum is A Christmas Story, regarded by many as the finest holiday movie ever made; I can definitely see why. It’s a terrific, charming Christmas film but also a great movie, period. This ageless tale is filled with warm holiday spirit and subtle humor. What puts it over the top, though, is the relatable character at its center. Ralphie is an extremely well-developed (and likeable) child character, something basically extinct by now. Peter Billingsley and Melinda Dillon are stellar and so is the writing. ****

Guess which of the two I’ll be watching every December.