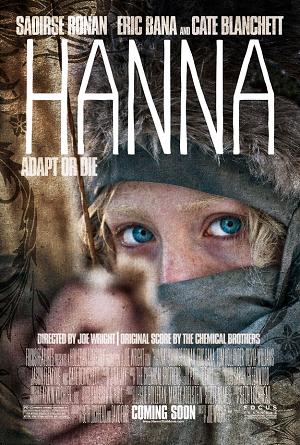 Second collaboration between director Joe Wright and actress Saoirse Ronan, after the young Irish actress nabbed an Oscar nomination for her haunting turn as Briony in Wright’s Atonement. Since that career-making role, Ronan has steadily cemented her status as one of the best (if not the best) actress of her generation. Roles in films like The Lovely Bones, I Could Never be Your Woman or The Way Back shine a deserved spotlight on this wunderkind. In Hanna, Saoirse plays the titular character: a teenage girl with superhuman strength and agility, no mercy, and the social skills of a toddler. Ronan is seriously good in her first lead role; both tender and menacing.

The main cast is excellent. Cate Blanchett is deliciously evil as Marissa Wiegler and Eric Bana is up to par as Hanna’s father. Besides the humongous acting caliber, the movie is a visual and auditive treat. Alwin H. Kuchler shoots the film with a striking, cold palette of blue, gray and white. The cinematography, along with the Chemical Brothers’ score, renders Hanna’s imagery coolly futuristic, even when showing a broken-down Moroccan inn or an old amusement park. Joe Wright’s knack for style is still evident, but his last film is more Lola Rennt or Bourne Identity than Pride & Prejudice (which isn’t necessarily a bad thing). Even though there are some issues with character development, Hanna’s riveting action sequences are enough to win you over.