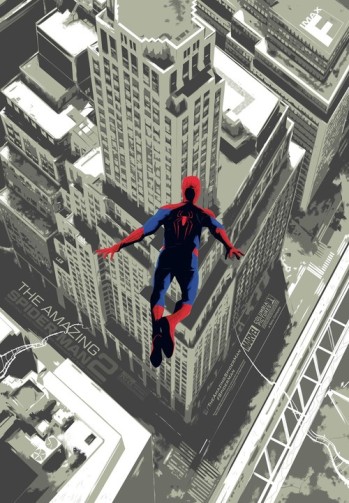 You could argue that this franchise reboot was rushed and unnecessary, and I’d be inclined to agree, but only five years after the disastrous Spider-Man 3, with its goofy-dancing, emo-haired shell of a superhero, Marc Webb ([500] Days of Summer) and writers James Vanderbilt, Alvin Sargent and Steve Kloves resurrected ‘Spidey’, rendering him more charismatic and expertly blending action, comedy and pathos in the process.

Yes, this means I am one of the few who actually loved Webb’s take on the arachnid hero, so my interest in the inevitable sequel -which was greenlit before the first even came out- was a given. However, delays, the complete elimination of Shailene Woodley (Mary Jane) from the film and a shitload of villains (a problem that also plagued that infamous third chapter in the Raimi period) had me worried, so I proceeded with caution.

Thank heavens this is not as grim as S-M3, but it definitely doesn’t soar to the heights its predecessor did (or the second movie in the other trilogy, for that matter), mainly because it’s weighed down terribly by a ghastly script, care of Alex Kurtzman and Roberto Orci (Transformers, Cowboys & Aliens) along with Jeff Pinkman.

Decent villains in comic-book movies are hard to come by, and this film does not make the search any easier. The Amazing Spider-Man‘s biggest flaw was exactly that: a laughable, terrible-looking and not very menacing baddie (The Lizard). And now we have three.

Rising star Dane DeHaan is very good as the dapper Harry Osborne, but once he goes into Green-Goblin mode, it’s all very SNL-skit from him, while Paul Giamatti is a 2-ton, hammy Russian mobster cliché that fortunately is on screen for just a few minutes (sadly, he’ll play a bigger part in the next film, it seems).

Which brings us to Jamie Foxx’s Electro, a misunderstood, human lightning bolt who will, no doubt, divide viewers. The threat is there: we see the havoc wreaked by his ability to absorb and manipulate electricity, coupled with the wrath that comes from a lifetime of being ignored, stepped on and, on top of that, “betrayed” by his idol, none other than Spider-Man.

However, Electro, both before and after transformation, comes off as unbearably cheesy and gets stuck with the worst lines in a film were there are plenty. So bad, in fact, that they bring back memories of Arnold Schwarzenegger’s awful Mr. Freeze from Batman & Robin.

OK, positives, positives. Well, there are several of those too, thankfully. The visual effects and cinematography have never been better, and give us a crystal-clear image of Spidey as he jumps and web-slings his way through the Big Apple. And once again, the cast is superb: Emma Stone and Andrew Garfield are clever, charismatic and continue to share a scorching chemistry, while the latter absolutely shines in the tender scenes with motherly figure Aunt May (Sally Field).

So while it may seem that the wrong overpowers the right in this actioner (it kinda is that way), especially so soon after the solid Captain America: The Winter Soldier, you could do much worse. Now Webb and his writers need to step up their game for Part 3. No dancing, please.

It’s only April, but the release of The Amazing Spider-Man 2 has kicked the summer movie season into gear, so I want to share with you the awesome montage my friend Amon Warmann made of the biggest blockbusters we’ll be getting in the following months. Make sure to follow his blog, too!