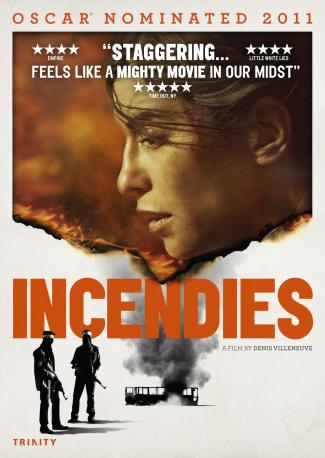 You know how sometimes you’re sitting at the table after dinner with your parents, in peaceful silence, and suddenly they grace you with a story about the past that you had never heard before? You can’t believe something that interesting or shocking or funny or infuriating happened to the people who’ve raised you, essentially the ones closest to you.

Imagine that situation playing over and over for several weeks, instead of it happening every other year, with each revelation about your parent’s life before you were born more stunning and piercing. Add the pain of not being able to confront them about their dubious choices, console them for their losses and congratulate them on their victories, since you’re learning everything post-mortem.

This is the way Incendies kicks off. Nawal (Azabal) has just passed away and left all her belongings to her children, twins Jeanne (Désormeaux-Poulin) and Simon (Gaudette). Amidst their grief, they must also deliver letters to their brother and father, both of which they didn’t even know existed.

Simon rejects the task but Jeanne can’t let her mother’s dying wish go unfulfilled. She heads to an unnamed place in the Middle East (supposedly Lebanon) where, in order to know where to find the rest of her family, she must first dig into her mother’s tumultuous past, slowly uncovering hard-hitting truths and changing her concept of the woman who gave her life.

There’s only so much information a single person can take in, and soon Jeanne asks her twin brother for help. Together and apart they get to the bottom of what made their mother the person she was, as they try to make sense of her choices and her devastating journey.

Simultaneously sprawling and intimate, Incendies can be boiled down to one idea: sacrifice. It’s a splendidly shot drama, with a riveting central performance by Lubna Azabal and a magnificent script by director Villeneuve. His writing is rich, intelligent and feeds us Nawal’s secrets slowly but constantly, like water droplets out of a faulty faucet.

Packing quite a few emotional punches and twists, Incendies is one of the finest dramas I’ve had the pleasure of watching unfold and, I guarantee, the final revelation will make your jaw drop and your guts churn.

It’s been a couple days since I watched this “Best Foreign Language Film” Oscar nominee, and I still can’t get it out of my head (or stop recommending it). It’s a must-see! Thank you, Secret Santa, for the gift of great film.

This review is part of the Not-So-Secret Santa Review Swap (in July), hosted by The Cinematic Katzenjammer

← It’s a sunny day, WordPress family!
DVD Court: Oblivion, The Place Beyond the Pines, Mud and To The Wonder →