Comic-Con Fiasco or: How my day went from terrible to kick-ass 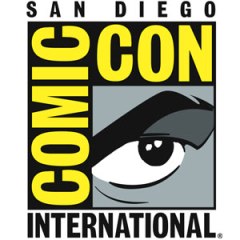 I had written off San Diego Comic-Con 2013. Missed the badge sale several months ago. Then volunteer registration came and I missed that as well. My dear friends Laura and Anais really wanted me to be there for the third time, so they sent every sweepstakes and social media contest my way. Among those links was a registration form for volunteers, not for the convention itself (that’s how I got in on my first two visits) but for a specific figurine-selling company which I’ll not name. I typed in my info and moved on.

To my surprise, a few days later I received an e-mail, saying that I’d been picked. In a chart, I found my shift went from 8 a.m. to 12 p.m. on Saturday. “Yes!”, I thought. I’d be going over to Comic-Con after all. Just 4 hours of easy, light work and I’d be free to roam the halls of the San Diego Convention Center, collect lots and lots of freebies and maybe see someone cool and famous up close.

Taking into consideration the fact that I had to be at the con at 8, that crossing the border would take about an hour (as usual on Saturday mornings) and then the trip over there would take another 45 minutes, I got to the international border at 5:20 a.m., thinking I could even have breakfast after crossing and still get there a few minutes early.

How wrong I was.

40 minutes in, the line stopped moving. From that point on, it kept a snail-like pace. I panicked and texted the guy, explained the situation, apologized and told him that I hoped he could assign a later shift, but I understood if he couldn’t. He replied with another phone number and told me to call it when I got there.

Another two hours went by and I lost all hope. By the time I was on the American side, I was already ten minutes late, and I hadn’t even stepped inside the trolley.

There I was, outside the convention center at 9:15, hating every immigration officer ever with all my might, desperately trying to get in. I called the number, got another guy and started explaining. He told me they went with a back-up volunteer and that he’d see what he could do.

“Call me back in two hours”, he said. I knew from his tone that he empathized with me.

I walked through downtown San Diego stuffing freebies and flyers in an oversized bag from The Science Channel (apparently they have a show called Punkin Chunkin and another one starring James Woods), watching costumed people as they went by and trying not to think of my defeat for the next two hours. Free candy and a copy of Entertainment Weekly didn’t numb the pain.

Two hours went by and I texted. “Still nothing”, he replied.

Back to the streets of “America’s finest city”. Bought a Superman-themed Comic-Con T-shirt, won a pair of earbuds courtesy of 5-Hour Energy and emerged victorious at a boat race sponsored by the History Channel’s Vikings (I’m not making this up). Not even beating strangers at paddling a Norse kayak across a tiny pool eased my suffering.

Another two hours. Still no good news. I began to realize that if I didn’t get in 4 hours earlier, I wasn’t gonna do that in the middle of the afternoon, when the con is at full capacity.

On my way to 7-Eleven for a drink, I received a flyer. “Free T-shirts and autograph signing”, said the chick dressed as Hit-Girl. “Cool”, I thought, “might as well”.

I walked towards 8th and Island, where a huge lot devoted to Kick-Ass 2 stood, complete with VIP lounge, an area for kids, a stage and a silk-screen printing machine.

A custom-made, yellow and green Kick-Ass shirt lightened my mood a little (which I’ll make sure to wear when the movie opens in a few weeks). Then I saw another line. “What’s this for?”, I asked. “The signing”, someone said. It was happening soon, apparently, so I joined the crowd.

People started cheering, so I turned my head and there they were. Aaron Johnson! Christopher Mintz-Plasse! Donald Faison! John Leguizamo! Some people I don’t know! Sadly, no Jim Carrey or Chloë Moretz, but whatever, I’m a couple of meters away from McLovin!

I was so ready to take pictures with these cool guys, shake their hand and tell them I was a fan, when the line stopped moving. Turns out, they stopped signing because they needed to hurry over to the convention center.

No! So close yet so far!

I stayed in line. I couldn’t give up, not after the day I’d had. Other people stood there too. Some lesser-known castmembers started leaving. I won’t name them because, honestly, I can’t. Seeing as we wouldn’t budge, Chris Mintz-Plasse and Aaron Johnson left their table and raced alongside the queue, signing posters as fast as they could (including mine). Nice fellas.

Donald Faison followed suit. I have to say, I was so happy to be near Turk from Scrubs. Also got his autograph, yay!

John Leguizamo remained in his seat, and kept signing people’s posters. It was my turn. Went up to him, told him I was a fan. He said “thank you” and “follow me on Twitter” (which I do now). Then this happened.

I didn’t think it could but my day turned around. Got all the signatures I wanted and even got Toulouse-Lautrec to record a quick shout-out to my beloved blog. Thank you SDCC and Universal Pictures (or whoever) for making this happen.

Next time, I’ll either buy a ticket or spend the night in San Diego and avoid the insane lines in the morning. Lesson learned. 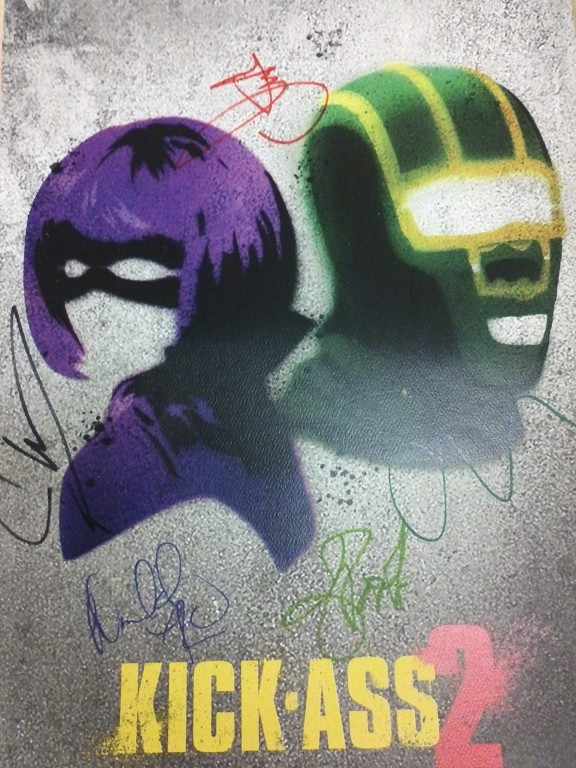 Here’s my signed, limited edition poster of Kick-Ass 2 (#147 of 300). Orange autograph at the top is Christopher Mintz-Plasse, black is John Leguizamo, blue is Donald Faison, lime green is Lindy Booth and that green scribble below the face of Kick-Ass is, of course, Aaron Johnson.

47 thoughts on “Comic-Con Fiasco or: How my day went from terrible to kick-ass”