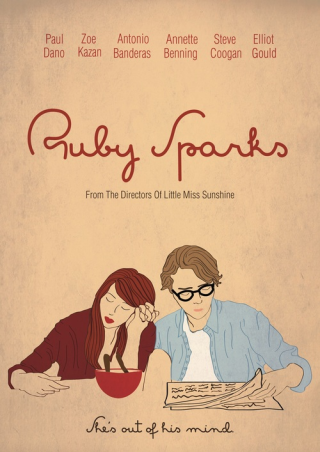 The care that went into developing the colorful host of characters and the directors’ compromise to their material remains intact, though. If this is the result, six years between films are well worth it.

Blending the basic premise of Stranger Than Fiction with the foundations of the romantic comedy, one of the subgenres that’s hardest to nail, and infusing it with a bit of the irony-free magical realism that Woody Allen does so well, Dayton, Faris and screenwriter Zoe Kazan create one of the most enjoyable films of the year that just ended.

Ruby’s biggest achievement is not the unobtrusive directing by the husband-and-wife filmmakers, but rather the marvelous script in which their movie is based. Kazan, for the situations and characters she has created, is responsible for the film’s rejection of formula and the genre’s conventions.

The young actress and first-time feature writer excels at giving depth and fully fleshing out her characters. They’re not one-dimensional: they talk, have normal relationships (i.e. not perfect), act, react and live like you and me.

They have good times and bad, family troubles, mood swings, storms and droughts of creativity. They’re people and they feel real. The humor is organic, unforced. The newbie writes like a pro. Older scribes would be thrilled to have her talent.

Perhaps Dayton and Faris’s main contribution to the film is their assemblage of an extraordinarily talented cast. Paul Dano in his finest performance to date, a hilarious Chris Messina, Antonio Banderas and Annette Bening in a fun turn as a couple of hippies and, again, the lovable Zoe Kazan are all memorable.

On the downside: a very dark climax, despite being gut-wrenching, clashes with the predominantly light tone up to that point, while the final scene feels more like an easy way out than a proper conclusion.  Still, Ruby Sparks is an example of creativity and dedication that shouldn’t be overlooked and should have played a bigger part in the awards discussion.

← DVD Court: Taken 2, The Possession, and To Rome with Love
Silver Linings Playbook: We all go a little mad sometimes →