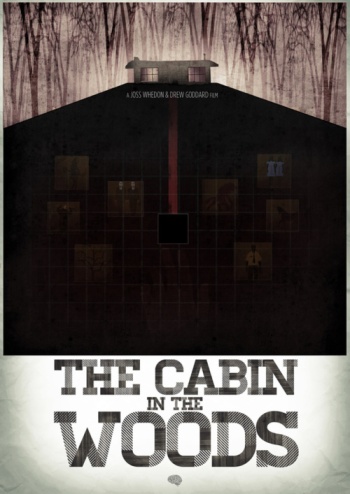 Horror is one of the genres with less appeal to me as a film buff and budding critic. There have been few movies in this genre that I’ve thoroughly enjoyed and even less have really and truly frightened me.

The Omen remains my favorite scary flick, The Exorcist and Rosemary’s Baby are undisputable classics and I love how Sam Raimi juggles terror and comedy in Drag Me to Hell.

But aside from that Top 4, I struggle to find other satisfying titles among my limited forays into the genre. After months of glowing reviews, I sort of expected Cabin in the Woods to join the list but, despite some shining moments, it falls short.

I’ll give this meta-horror/comedy/sci-fi points for originality. It offers an interesting, unorthodox spin on a tired genre and its characters, even though they’re stock, are well-developed and easy to identify with.

It has fun with horror tropes and mixes things up just enough to separate itself from other spoofs/parodies/homages. But, for a movie that’s supposed to take the genre and its conventions and turn them on their heads, it sure falls prey to the same clichés and trite techniques. After a promising start and an exciting second act, the film unravels rapidly towards its messy climax and weak ending.

This is the same thing that ultimately crippled Chronicle. Mayhem in your story doesn’t mean there should be mayhem in your storytelling, and that was Whedon and Goddard’s biggest mistake. Richard Jenkins and Bradley Whitford are great in their roles and the movie, though imperfect, flies by, so you won’t be asking for your money back.

← Someone thinks my blog is lovely
Frankenweenie [1984] →