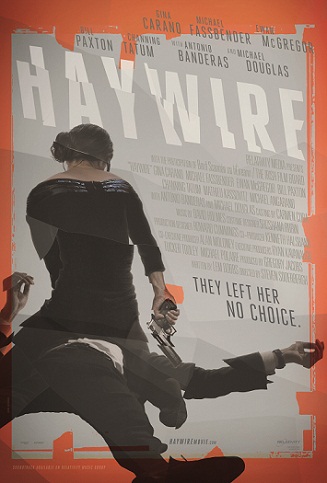 Haywire, the latest film by versatile director Steven Soderbergh, who gave us another high-profile movie with a big, talented cast, Contagion, just four months before, takes the story of Mallory Kane, a gorgeous Jason-Bourne-with-two-X-chromosomes and tells it with all the swagger of Ocean’s Eleven and all the ass-kicking and bone-shattering of the UFC.

Actresses like Sigourney Weaver, Linda Hamilton and, more recently, Angelina Jolie, have successfully portrayed believable action heroines on the big screen. Is MMA star Gina Carano worthy of joining those women in the annals of film? Yes and no. Yes, because her fighting skills are indisputable, and a beautiful woman capable of choking a man to death will always be alluring (at least in fiction). No, because while all those actresses brought their beauty and ass-kickery, they also brought some degree of acting talent, something Carano, sadly, does not really possess (the robotic dubbing of her voice did not help matters).

Stylish almost to a fault, Haywire suffers from an all-too-common malady that plagues many films of today:  almost all the effort went into the casting and not the story.  Yes, the film’s many fights are stunning displays of great choreography and general badassery but all the characters, including Kane, are paper-thin and extremely underdeveloped. Without these to hold on to, whenever the fisticuffs cool down a bit, Haywire stops dead in its tracks.

← From and Inspired By – Cinema Italiano
Kid In The Front Row →