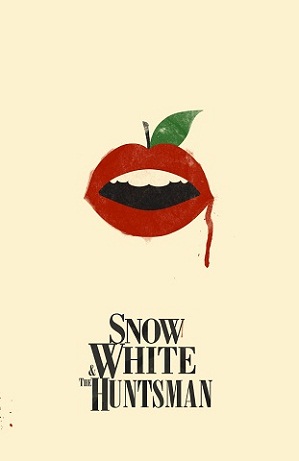 As much as the team behind this film wants to convince you to the contrary, there is barely anything remotely interesting going on here. This uneventful retelling of the classic fairy tale is outstanding in the visual department, namely cinematography and effects, but that’s because, like many other movies in this age of fast, easily digestible and ultimately hollow entertainment, it shuns an engrossing story in favor of sensory spectacle.

The best bits are whenever Charlize Theron is on screen, despite her performance devolving into hilariously bad camp. It’s hard to conceive that this is the same Oscar-winning actress that shined in Monster, North Country and Young Adult but, at least, she injects the fun into a drab affair. We miss her scenery-chewing mostly during the middle act, especially because the very limited acting range of Chris Hemsworth and Kristen Stewart has never been so exasperating!

Besides the poisoned apple (which barely makes an appearance in this version), another important icon of the story is the notion of “true love’s kiss”, the biggest romantic element. SWATH’s three writers, including Drive scribe Hossein Amini, take the trouble of setting up not one but two romantic subplots for our underdeveloped Snow White only to drop them suddenly and completely.

To appropriately take in most movies, especially summer blockbusters, the viewer has to suspend disbelief but this pushes the limits. Is that mirror badly calibrated? Is this medieval, grim take on Snow White set in an alternate world where Kristen Stewart is more beautiful than Charlize Theron? Those are two of many questions you’ll probably ask yourself (maybe aloud) during the very slow 127 minutes of runtime.