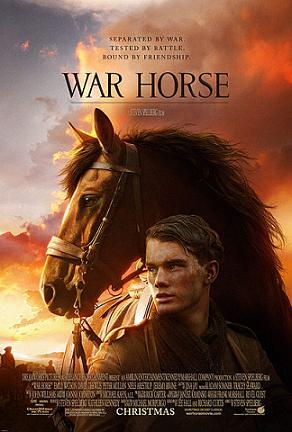 Splendidly photographed by Janusz Kamiński, War Horse is first and foremost a visual and technical marvel. Sweeping vistas of the English countryside and the WWI trenches are expertly shot by the polish Spielberg collaborator. Along with Emmanuel Lubezki’s for The Tree of Life and Newton Thomas Sigel’s for Drive, this is the finest cinematography work of 2011. The cast is noteworthy as well, especially Emily Watson, Peter Mullan and Tom Hiddleston, one of the unsung heroes of film in 2011 (apart from War Horse, Hiddleston also turned in excellent performances as “Loki”, the best thing about the disappointing Thor and F. Scott Fitzgerald in the gorgeous Midnight in Paris). However, I didn’t give in to this film’s manipulative ways. Most of the movie’s biggest scenes are so calculated, so meticulously constructed to elicit tears, it’s nearly impossible to feel anything. There’s pain to be felt when “Joey”, our horse protagonist, is badly injured during a stunning escape sequence, but whenever the humans come into play, the drama can’t help but seem fake.