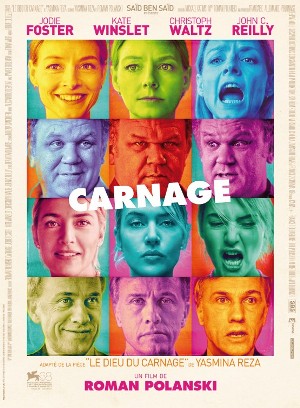 You’d think nothing could go wrong given the material, the director and the cast, but this is mostly a misfire. It starts off being very funny, sprinkled with great lines of subtle, well-written comedy. It even made want to catch a plane and see God of Carnage on stage. But as our protagonists descend into total chaos, the movie becomes increasingly worse. Keep in mind Carnage is only 79 minutes long, so this change of gears is quick and abrupt. Carnage plays as a lighter, bad version of Who’s Afraid of Virginia Woolf? Towards the end, what was well-acted and humorous becomes boring, forced and exaggerated. Christoph Waltz and Kate Winslet stand out from the reduced cast (although their work is not especially memorable), Jodie Foster is a little (OK, a lot) over the top and John C. Reilly sort of gets lost among the other flashier thespians.