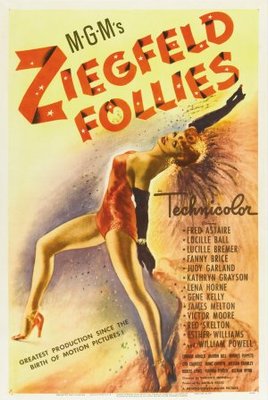 As it says in the movie, “Ziegfeld never cared so much about villains, plot, stories. The Ziegfeld Follies was itself a story of an era”. So, while it doesn’t offer anything in terms of narrative, this is a priceless document that gathers some of the biggest stars of the 40’s, luminaries who have become celluloid icons. Sadly, the real star power (Judy Garland, Gene Kelly) appears too late into the picture, after an hour and a half of random musical numbers, dance sequences and comedic skits. So much style and so little substance does get tiresome after a while and, while the film’s visually dazzling, it’s also unbearably campy and over-the-top. Of course it didn’t seem that way 60 years ago, but some bits are incredibly racist and/or offensive. See only for Garland’s “The Great Lady Has An Interview” number and the amazing pairing of two of dance’s biggest legends, Gene Kelly and Fred Astaire in “The Babbitt And The Bromide”. Then again, you could watch those two clips on YouTube and save yourself the boredom.