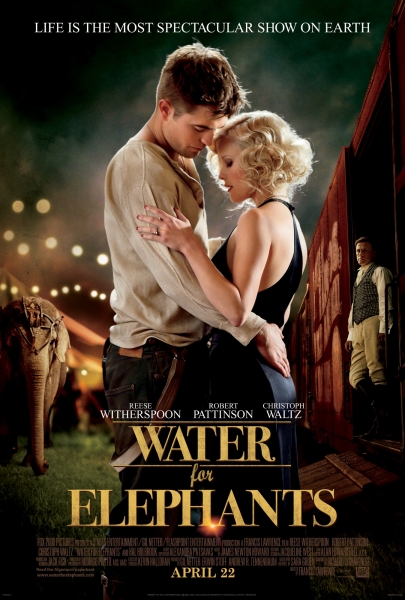 Lush, good-looking drama set upon a traveling circus during the Great Depression. Based on the bestselling novel by Sara Gruen, Water for Elephants is melodramatic, but we let it, since it’s an amazing 30’s throwback (and how could that not be melodramatic?) Robert Pattinson is as stiff and monotone as “Jacob Jankowski” as he was as “Edward Cullen”. Reese Witherspoon does a decent job as ‘Marlena’, but an older, grittier actress would’ve been the ideal choice for the role. Christoph Waltz, however, is splendid as ‘August’, yet another villain. He walks the line between magnetic and repulsive all through the film, giving us a smart, driven bussinessman who we admire, as well as a violent monster who we fear. Like As Good as It Gets‘s brussels griffon ‘Verdell’, ‘Rosie’ the elephant raises the question: ¿could this sad-eyed pachiderm actually have acting ability? Director Francis Lawrence, backed by a solid script from Richard LaGravenese, gives us a film that’s far from perfect but possesses an undeniable charm and genuine emotion. The story’s climax is one of the most exciting I’ve seen in a long time and worth the price of the ticket.