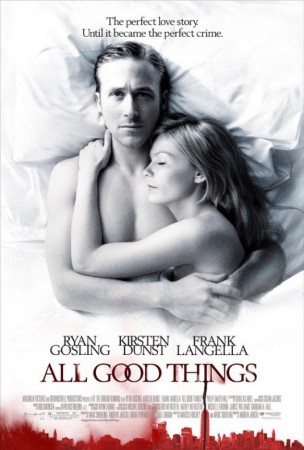 Modest, well-shot drama worth watching for its three lead performances. Ryan Gosling is haunting and profoundly unsettling. As his domineering father, Frank Langella leaves a mark with significantly less screen time than his costars. Kirsten Dunst goes through a mostly physical change throughout the film but nevertheless renders a decent performance (although the role deserved someone with a little more range). Great score helps set the eerie tone of All Good Things and the remarkable makeup work convincingly ages Gosling, but it’s here where his otherwise flawless performance falters. At the courtroom scenes, his character has aged around 30 years, something we can easily see in his facial features and his hair, now grey and scarce. But Gosling’s David Marks has only changed in appearance; his mannerisms and voice remain exactly the same as when he was a young man. Actually, from that point on, everything sort of falls down; it’s like a whole different movie, dangerously giving in to its cheesy, overdramatic side.