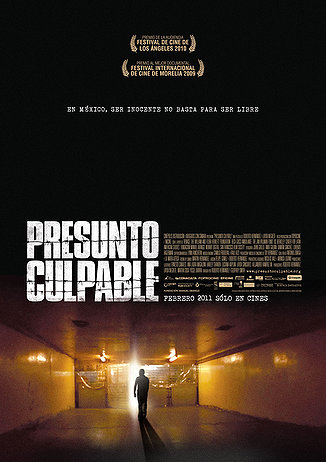 Presunto Culpable is a Mexican documentary that, since its release a couple of weeks ago, has been sweeping the nation and creating all sorts of controversy. Its projection on Mexican screens was even suspended for a few days due to a lawsuit by one of the film’s unwilling “stars”.  Stripped-down and nicely edited account of the harrowing plight of Antonio Zúñiga. It only helps that he’s such an engaging personality, allowing us to identify even more with him and the terrible situation he’s been thrown in.  Eye-opening investigation on the country’s shady judicial system, where the accused is guilty from the beginning and has to prove his innocence, not the other way around. As moving as it is inflammatory, Presunto Culpable is a thoroughly engrossing documentary that teaches us that the worst villains exist not on paper or on film, but lurk among us. My only objection is the use of staged phone calls, which the film could’ve definitely done without.